Samsung Galaxy Note 4 will launched by mid-October in the U.S. But what about other countries? Here the detailed launch time of the Galaxy Note 4 in regions across the world ranging from Asia to Europe as well as the Middle East. 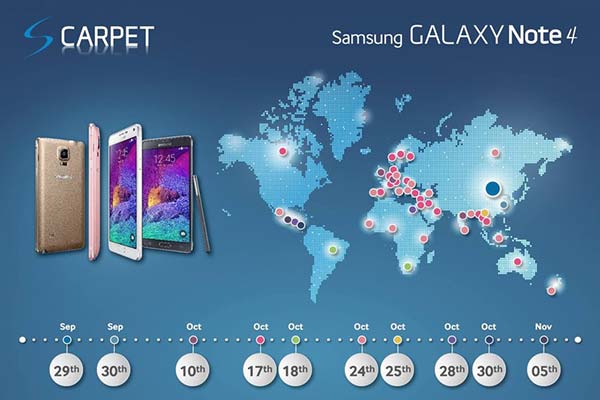 In South East Asian markets, the device scheduled to launch on October 11 and the lucky country to get first Galaxy Note 4 is Singapore and followed October 10 in India. The next country is Thailand on October 13, then Myanmar on October 15, Cambodia on October 17, Vietnam on October 24, and the last is Indonesia, Laos and Philippines on October 25.

For the US market, the Note 4 will be launching on October 17, the particular day nearly all countries in Europe as well get the device. Depending on the region, Samsung will probably launch the octa-core Exynos 5433  version for the non-LTE markets. The LTE market Regions like the U.S., UK will get the Snapdragon 805 version.

Find Us on Social Media