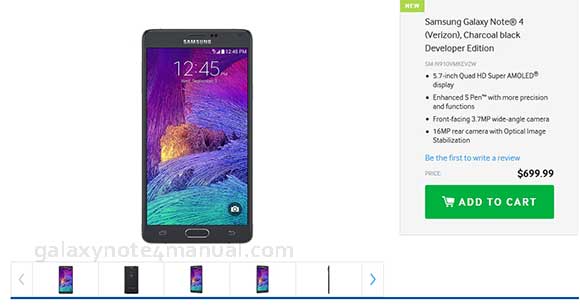 Samsung Galaxy Note 4 Developer Edition for Verizon comes with a 5.7-inch Quad HD Super AMOLED display with a resolution of 2560 x 1440 and a pixel density of 515 pixels per inch (ppi). The device is powered by a 2.7 GHz quad-core Qualcomm Snapdragon 805 processor, Adreno 420  and has 3 GB of RAM. It’s running with Android 4.4.4 KitKat, includes 32 GB of internal storage, and a microSD expansion slot that will support up to 128 GB microSD cards.

For anyone who is considering to purchase the Verizon Samsung Galaxy Note 4 Developer Edition, take a look at Samsung’s online store. The price is $699.99 with no subsidy option, and it’s the same price as the non-contract retail version.